In Part 1 of Amanda’s Visit at Christmas 2016, I left-off on Christmas day in Ft. Myers, and in case you missed it, this has become my favorite part of Christmas – when we sing Happy Birthday to Jesus at Dave’s cousin’s house. She goes all-out, with a birthday cake and candles. I love it, even though I believe that this time of year was when Jesus was conceived, not born. Still, it is one of the best things I have ever seen.

Afterwards, we stopped by to see some friends of ours and by the time we got back to the condo, everyone was beyond ready for bed. The next morning, I drove Dave to the boat docked at the beach and the kids and I packed up my truck and headed home. Dave enjoyed a day by himself on the boat fishing. The three of us made plans for the following day to go out to dinner and then head downtown to see Sandi the Christmas tree, sculpted entirely out of sand.

Choreographed to music, the lights danced around, blinked, and changed color quickly. It was pretty neat. Not missing a chance to capitalize, West Palm Beach made Sandi a star – she had trailer just like the movie stars and “Sandi Swag” was offered for sale.

The following day, Amanda said goodbye to her dad, and she and I headed north. Because we needed to be at the Orlando airport at 6:00 in the morning, we decided to drive up and spend the night. We had planned on taking the long way and stopping in Sebring to see Jonathon, which we did, although we wound up taking the long, long… long, long way.

In hindsight, I somewhat enjoyed it. I am glad to know where River Ranch is, and am happy I can say that I have driven through it. Even more so, I am glad to know that right down the road from it are fishing and boating communities. The best part though, and yes, I know this is just weird, but to be a little scared, driving in the pitch dark between Reedy Lake and Lake Arbuckle on a two-lane tiny road with no shoulder, well, I would have rather been with no one but Amanda, and since it was indeed her sitting next to me, well, in hindsight I can say it was a bit thrilling. My “drama-fix” for the year, perhaps.

I thought I knew where I was going and it was not until I saw signs for Ft. Drum that I realized something was wrong. “Ft. Drum!” I exclaimed, “we are going to pass Debbie’s house,” I told Amanda, “that’s not right!” After chatting for a few about our friend while I tried to decide what to do or where to pull over, Amanda pulled up the map on her phone. She showed me what it said. We determined that turning around was not the answer. So we took five hours to get to Sebring. They were also some of the best hours of conversation.

After having dinner with Jonathon, we continued north to Monroe’s on the Lake in Sanford, Florida. Unfortunately, I could not avoid I-4, although I would not have known that I wanted to until it was too late anyway. I-4 was under construction, bumpy with uneven pavement like I have never seen. The six lanes of highway twisted and turned and were as narrow as could be, and with semi’s barreling through the 60 mph zone going 80 while tourists slowed down to 40, trying to figure out where to go, it made for the worst experience on the road I have ever had. Amanda even groaned when she looked at the map and saw we had 20 more miles of it to go. Finally, we made it to our hotel a little before 11, and the first thing Amanda said was, “I see why dad choose this hotel!”

Situated on Lake Monroe in Sanford, Florida, this affordable hotel had a friendly staff and nice rooms. The room we were in on the second floor overlooking the pool was nice anyway, with a mini-fridge and wood (laminate) floor. The bed was comfy and had the type of pillow-top comforter that I love. Perhaps Dave figured, with a bass fish for an emblem, how can you go wrong? I am glad he wasn’t wrong.

In the morning I took Amanda to the airport and waited around, hoping to get a picture of her plane departing. Realizing it would be another 20 minutes or so, I decided to go back to the hotel, only 10 minutes away, and take them from there. Before leaving, I took a picture of the airport, where it appears that Allegiance Air has the place all to itself. The place that reminds me so much of middle-school pickup.

Back at the hotel, I saw a plane take off at 7:20. I took a video and pretended that I knew it was Amanda’s plane. Then I set out to take photos of the scenery that surrounded me. 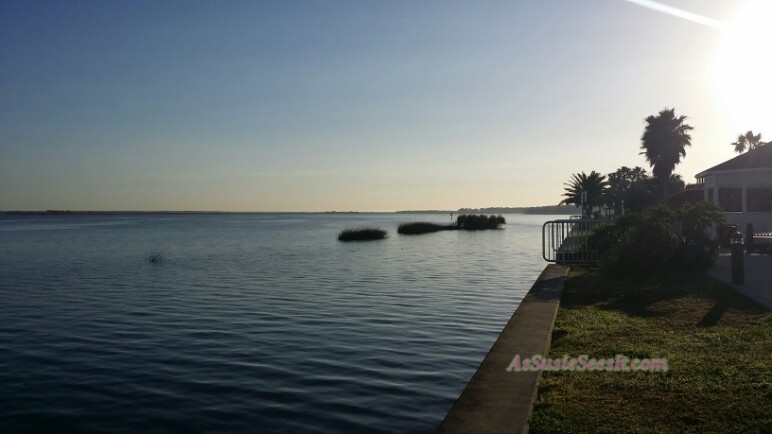 This would be a nice place to meet up with others, whatever the occasion. I believe they also have a banquet room, and this beautiful gazebo is in a nice yard area in between the hotel and lake. I also spotted a huge grill/smoker but do not know if this is available for guests or what the story is on that. Worth checking out though if you are looking for something like this and enjoy doing that sort of thing (like us).